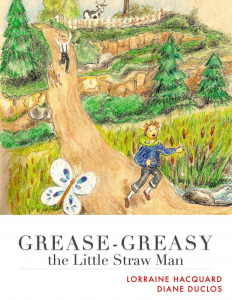 Lorraine Hacquard and Diane Duclos are presenting their first children’s storybook, Grease-Greasy, the Little Straw Man. Discover how this playful and inquisitive little fellow appears into the lives of a childless couple. Soon, he begins to look for adventure, but quickly finds himself caught up in a trying situation. As he struggles to regain the safety of his new home, he begins to realize the importance of having a family.

This family folktale dates back to more than one hundred years ago. The story line is simple, but it is fraught with references to natural phenomena and rural lifestyle of olden days. Each page is beautifully illustrated and harbors interactive elements which link to nursery rhymes, sound effects, photo galleries and short educational film capsules. This surprising storybook is sure to captivate and stimulate a young audience. 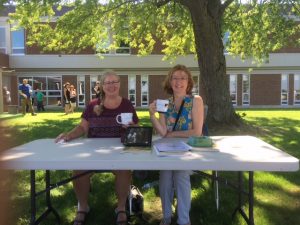 Lorraine Hacquard and Diane Duclos presented a workshop at the New Frontiers School Board in August 2016.  They introduced their book, Graisse-Graissou, and its English version, Grease-Greasy.  They went on to describe activities listed in their Livret d’accompagnement, which offers a project-based approach to using this folktale within a classroom setting.

November 2016 – Story Time With an Author at the New Liskeard Public Library in New Liskeard, Ontario.